HOW EVOLUTION SHAPES OUR LOVES AND FEARS

Just Babies – The Origins of Good and Evil 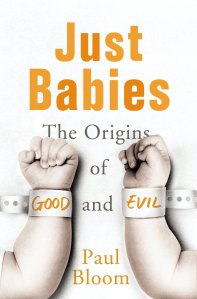 In this engaging book, Paul Bloom summarizes the rapidly growing body of research showing that some aspects of morality come naturally to us but others do not. This research also shows that babies and infants have a surprisingly well developed sense of morality that they could not have learned by experience. Bloom covers many topics, such as negativity biases, equality biases, disgust, and group selection, that I also mention, but especially interesting is his interpretation, which parallels mine, of the puzzling fact that participants in one-shot interactions share more than they should and recipients reject low offers they should accept given the payoffs in the game.

for one-shot anonymous interactions. We evolved in a world in which we engaged in repeated interactions with a relatively small number of other individuals. So we are wired to respond to the lowball offer as if it were the first of many, even if we know, consciously, that it isn’t. The rejection, then, is a corrective “Screw you, buddy” that would make perfect sense if you were going to play the same person multiple times.” (page 72)

Powerful and informative though laboratory experiments are, we need to remind ourselves that they often present participants with artificial choices under artificial conditions.