HOW EVOLUTION SHAPES OUR LOVES AND FEARS

Clive Finlayson descending to Gorham’s Cave on Gibraltar, one of the last holdouts of the Neandertals.

Clive Finlayson, Director of the Gibraltar Museum, is a leading researcher of Neanderthal ecology.  Trained as a behavioral ecologist, his research is enriched by his ability to creatively combine concepts from ecology and archeology to generate new insights into the lives of these people.  Their last holdout was Gibraltar and vicinity, where they survived until as recently as 32 thousand years ago.  In his recent book (The Improbable Primate. How Water Shaped Human Evolution.  2014,  Oxford University Press) Finlayson develops his Water Optimization Hypothesis, which asserts that Homo sapiens functioned best in sub-humid environments.  More humid environments were less suitable because access to resources in

dense forests would have been difficult. Most arid regions would have been less suitable because of a combination of scarcity of water and low resource densities. The optimal sub-humid environment, in his view, provided a favorable combination of trees, open spaces, and water. He supports his claim with extensive analyses of remains at archaeological sites, especially of the plants and animals that dominated Neanderthal diets. His description of the optimal environment for our ancestors accords well with the findings of evolutionary psychologists that I summarize in my book. In addition, he advances a more controversial hypothesis, namely that the need to move rapidly and efficiently across  landscapes to find water was the major selective force favoring a slender, long hind-limbed gracile bipedal primate. We are the descendants of that legacy. 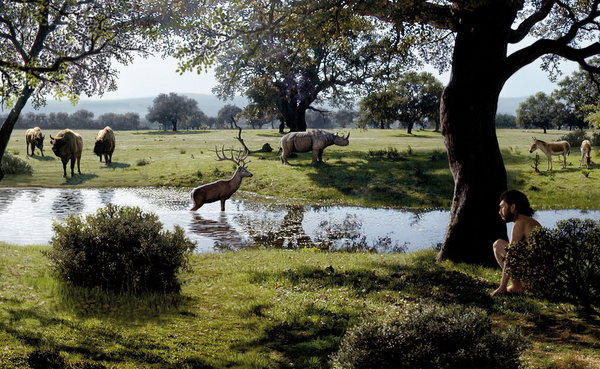 Whether or not Finlayson’s Water Optimization Hypothesis survives the detailed scrutiny it is sure to be subjected to, his claim that water and food are bundled together is certainly correct. Our ancestors would have benefitted by tracking rain fronts because herds of migratory herbivores would also have tracked those fronts to feed on the new growth of grass generated by the rains. We can witness this phenomenon today in Tanzania’s Serengeti, one of the few herbivorous mammal migrations remaining of the many that existed on Earth until relatively recently.  In addition, because our ancestors, unlike all other large mammalian predators, being able to carry with them their offspring and light-weight tools, could follow the migratory herds.  It was certainly also true then, as it is today, that the migratory herbivores, which escaped control by predators, vastly outnumbered resident species.  By following the rains our ancestors maintained access to an abundant food source that other carnivores could exploit less well.  By following the rains our ancestors also followed the food.